A reality check on Land-Rover myths

To paraphrase Mark Twain, it's not what you don't know that can come back to bite you; it's what you know for sure that isn't true. When it comes to maintaining your Land-Rover, misconceptions abound. And even the best intentions can lead you to spend more money than necessary or even compromise your safety.

In this section we talk about Land-Rover myths that can do more harm than good!

Myth: My Series 1, 2,2a or 3 gearbox keeps jumping out of gear. If I replace the little springs that push against the detent balls in the selector mechanism, that will cure it. True or False? 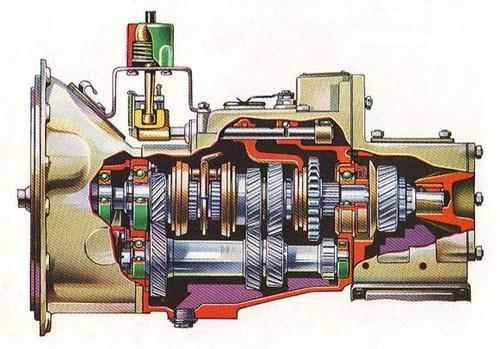 Firstly, the detent springs and balls serve 2 purposes, they provide a positive location and ‘feel’ that the gear is engaged and secondly and more importantly they all interact to form an interlock system so it is impossible to select 2 gears at the same time.

If its jumping out of 3rd and or 4th, the cause is either worn synchromesh teeth or the main shaft bush is starting to break up, as it does so the gears and synchromesh on the mainshaft can move backwards and forwards as the geartrain is put under load. This back and forth loading gets worse and worse, initial symptom being the jumping out of gear. Eventually bits of the bush disintegrate and if you are unlucky they get fouled up in the gear teeth.

If you drain the gear oil you may see it has brass coloured flecks, this is the mainshaft bush slowly disintegrating. The bush itself, on a Series 1, 2 or 2a gearbox is a one piece bush with a integral thrust washer machined as part of the bush. As it wears, one or both of the ‘collars’ become detached. 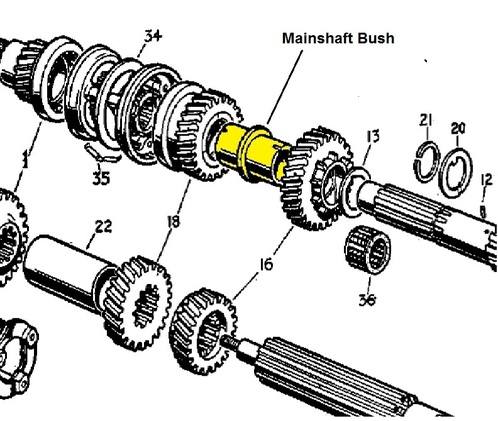 This became such a common occurance that for the Series 3 gearbox, Rover redesigned the bush so that one of the ‘collars’ was a separate item, effectively building the gearbox with a pre-broken mainshaft bush! 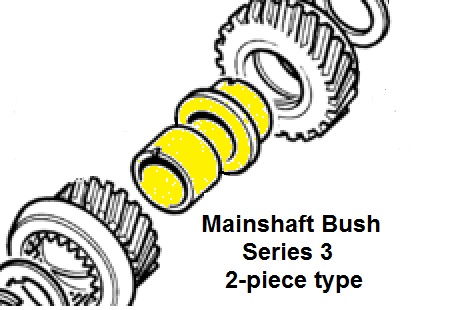 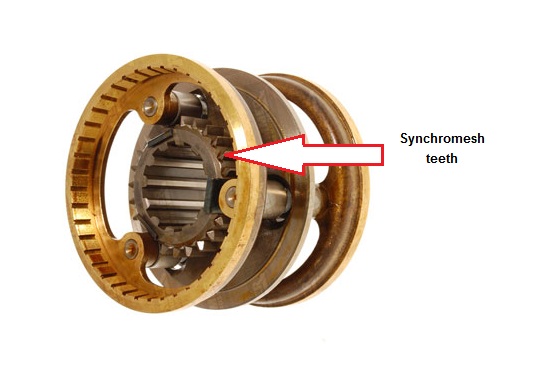 On early gearboxes they have parallel sides, and as they wear they develop tapered sides, which is not good if you want them to stay engaged. Later Series 3 gearboxes had these teeth machined as ‘arrowhead’ shapes, so they tended to stay locked together longer, but even  these will eventually wear away to a tapered shape.

Series 3 gearboxes of course have a 1st and 2nd speed synchromesh, which makes things even worse.

Think about it, in the space originally taken up by 2 gears on the mainshaft, Rover had to introduce a third component that had to do the complex job just described above. This compromise led to the 1st/2nd synchromesh unit being an inherently weak unit, as it also has its own set of detent springs, balls and spacer blocks.

Whilst the Series 3 gearbox had a nice strong  one piece layshaft, this was offset by the weak 1st/2nd synchromesh unit.

If you drain the gear oil, you may find lots of little teeth that seem to be too small to be gear teeth, these are the synchromesh teeth that have broken off. 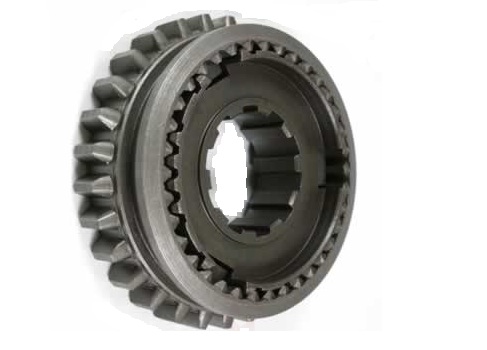 Whilst the new springs in the detent mechanism trick will work in some cases, unfortunately the only permanent cure is to overhaul the gearbox and replace all the worn and damaged components.

We offer several different kits depending upon the gearbox serial number and in 2 flavours, a budget version (REP suffix on the part number) or an OEM version.